Home Licensing The Most Anticipated Licensing Round Of 2021 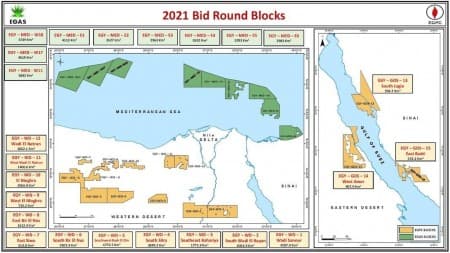 The energy markets have seen several major problems in the 21st yearst In the 20th century, it is still safe to say that the market slump of 2020-2021 caused the greatest damage of all. This also applies to international licenses, where dozens of rounds have been postponed either until 2021 or indefinitely, for fear of not generating enough interest in the face of drastic investment cuts and massive divestment programs. The bottom line is that 2020 was the worst year in terms of total acreage for oil and gas companies since 2002 (0.35 million km)2The price recovery from February to March 2021 will be a suitable springboard for a new licensing round – Egypt will take advantage of this dynamic with its latest licensing round. Egypt’s last licensing round took place in 2019. At the Red Sea auction, three blocks were split between Chevron (Block 1), Royal Dutch Shell (Blocks 3 and 4) and Mubadala Petroleum (Block 4). Although Cairo was a much-needed step in opening up a newly developed area – Egypt and Saudi Arabia only delineated their areas on the Red Sea in 2017 – Cairo was unable to market all 10 blocks on offer. Then came another licensing round that focused on the western Mediterranean in early 2020. The state-owned Egyptian natural gas holding (EGAS) was to offer 11 units. This endeavor never really materialized, instead the Egyptian Ministry of Petroleum and Natural Resources awarded 7 blocks through direct negotiations to Western majors who were supposedly financially, technologically and organizationally ready to develop offshore projects in the Mediterranean region.

Related: The future of US LNG hangs in the balance
The new licensing round includes 9 offshore blocks in the Mediterranean and 3 blocks in the Gulf of Suez, as well as 12 onshore blocks managed by Egypt’s General Petroleum Corporation (EGPC) in Egypt’s most important oil producing region, the Western Desert To be pleased about the offer of new acreage in the Eastern Mediterranean, especially blocks that are so close to the oversized Zohr field and possibly use the infrastructure already in place, but this is necessary. It can be said that the Egyptian authorities have done their best to Encourage investment in previously unexplored borders. After Egypt demarcated the Saudi-Egyptian maritime border, it signed a demarcation treaty with Greece in October 2020 and settled most of the maritime disputes with Israel.

As attractive as the prospect of new acreage in the Mediterranean region may seem, there is a geopolitical catch in Egypt’s current licensing round, namely the overlap of several offshore blocks with controversial sea borders:

Although Cairo has the political influence to solve future problems with Gaza, ie to create a joint program to develop potential fields by integrating offshore production into the Egyptian LNG system, it can hardly do anything with Libya. First and foremost, there is no way to get a comprehensive deal with Libya while it has two rival governments. Second, even if there were a unified Libya, there is no guarantee that Tripoli would want to form a covenant that it would find detrimental to its national interests.

In addition to all of the above, there is also one country that is most actively involved in the Libya conflict and generally seeking to exert its influence over the Mediterranean, a country that is almost certainly responding to Egypt’s offshore licenses, Turkey. All three blocks, which are to be allocated in the westernmost part of the Egyptian territorial waters (MED-W11 / W17 / W18), are delimited according to the bilateral agreement between Egypt and Greece, a pact whose legitimacy Turkey dismisses as “worthless” (in the Words of President Erdogan) on the grounds that there should be no sea border between the two countries. Such claims are part of a longstanding stalemate in which Ankara has argued that the Greek islands should not be included in the delimitation of the Libyan Mediterranean border. There have been numerous Turkish media reports in recent weeks stating that Ankara is on the verge of colonizing the Turkish-Egyptian maritime border, suggesting that the Turkish authorities would seek a diplomatic solution to consolidate their further claims.

Related: ExxonMobil will outperform as oil and gas prices rise

The blocks MED-E1 / MED-E2 / MED-E3 north of Zohr respect the delimitation of 2003 approval between Cyprus and Egypt. However, the Turkish-led Republic of Northern Cyprus will almost certainly claim almost all of Cyprus’ exclusive economic zone. Unless prospective games extend across the maritime border, the front line of the Egyptian EEZ is well delimited not to trigger an immediate reaction, although future drills could opt for the “overall scenario” here too, ie drilling licensed area in diplomatically refractory parts of the EEZ (as was the case with the French major in Lebanese waters). Ironically, the Israeli-Egyptian maritime collaboration is the most robust of any member of the drilling quintet in the Eastern Mediterranean.

By Viktor Katona for Oil IX