in the the last installment of “The $ 50 Ham” I built a general tool that is used by amateur radio operators who tune in or test all kinds of transmitters: a bogus load. This build resulted in “L’il Dummy”, a small dummy load that is intended for testing typical handy VHF-UHF talkie transceivers (HT) and screws directly into the antenna socket of the radio.

As noted in some readers’ comments, L’il Dummy has little real use. There is actually not much demand for a dummy load that screws directly into an HT, and it has been suggested that a proper dummy load is cheaply available in stores. I think the latter observation lacks the point of homebrewing and the Hackaday ethos in general, but I’ll admit the former point. So, at the same time as I was building L’il Dummy, I was building the larger, slightly more powerful version described here: Big Dummy.

As with the smaller HT version, the design for Big Dummy is not entirely my own. In the great tradition of finding out what other hams have done and sticking to it, I’ve built a version of a dummy load that K7AGE builtAgain, this is a design he borrowed from Elecraft, a maker of kits for transceivers and other ham equipment.

My design goals were bigger than L’il Dummy, but still pretty simple. At first I wanted the dummy load to be good for the RF bands and, if possible, in VHF. Second, it had to handle more power than L’il Dummy – I was shooting for 50 watts. Third, I wanted there to be a tap for transmitter power measurements and the standard SO-239 UHF connector. And finally, I wanted it to look good.

I decided to build a smaller version of the classic “Cantenna” dummy load. Not to be confused the Pringles-can WiFi antennas We have seen a lot. A Cantenna load is a large 50 Ω resistor in a paint can filled with paint dielectric oil for cooling. I decided to make mine in a liter can of paint.

Circuit sculpture, sorta. Still 1 kΩ, but with a tap for the test point.

Choosing the resistor for Big Dummy was a little more difficult than sourcing a single 35W thick film SMT resistor for L’il Dummy. Wirewound power resistors are easy to find, but as mentioned, they are completely wrong for a dummy load as their inductance would change the impedance of the load at higher frequencies. I finally managed to find 1000Ω metal film resistors in conventional axial lead housings. A pack of 30 pieces only cost me a few dollars. It was planned to connect twenty 1000 Ω resistors in parallel, resulting in a total impedance of 50 Ω. With a power loss of two watts each, the load should be able to absorb 40W – close enough to my goal of 50W.

The tap for the test point was also a modification of the design of K7AGE. He used a series-parallel network to build up his dummy load, which gave him a natural tap point between two of the series resistors that acts as a voltage divider. I had to play a few pranks with the resistors to build a network that does the same. I describe its construction in my Hackaday.io postThe quick version, however, is that four 1kΩ resistors in parallel series did the trick, allowing me to install a 1N5711 Schottky diode and a small ceramic decoupling cap for the test point while maintaining a total load of 50Ω.

To keep the leakage inductance at bay I decided to mount the resistors between two copper washers. That sounded like a much better idea than it turned out. I’ll leave the hijinks that resulted from this decision to the build log, but suffice it to say that trying to solder twenty resistors to a heavy copper plate isn’t as easy as you might think. In the end I used a cheap heating plate to evenly heat the entire assembly and solder all of the wires to one board at the same time. Then I flipped the assembly and ran it again. 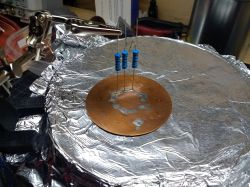 Does it go well for a while and then … 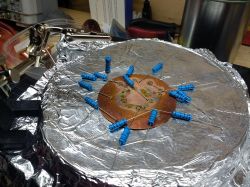 Oops. The hotplate got too hot.

I finally figured out how to do it – the plates had to be held together with the threaded rod first, and I had to use holes instead of dimples in the copper plates. That led to this beauty of overkill – I really dig circuit sculptures and wanted them to look good before I dive in. 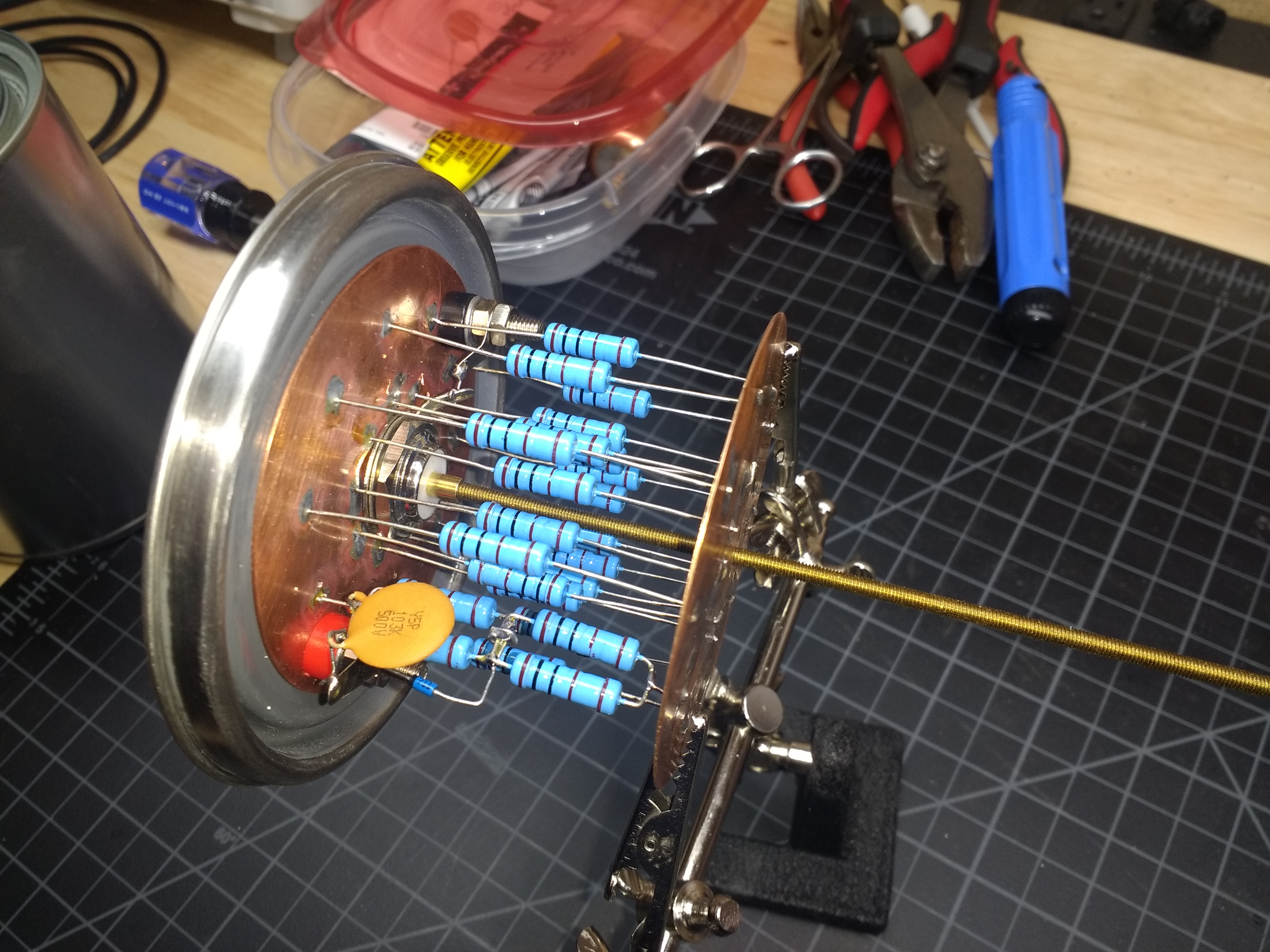 Almost done – all you have to do is shorten the center pole and connect it to the SO-239 socket on the lid of the can.

I chose simple mineral oil for my dielectric fluid. I was warned that oil-filled dummy cargoes always cause a mess, but I decided to give it a try anyway. It took almost a quart of oil to fill the can, and I got an initial leak around the connectors piercing the top of the can. I may need to apply seals to some sort of thing, but it’s fine for now if I just hold it upright. 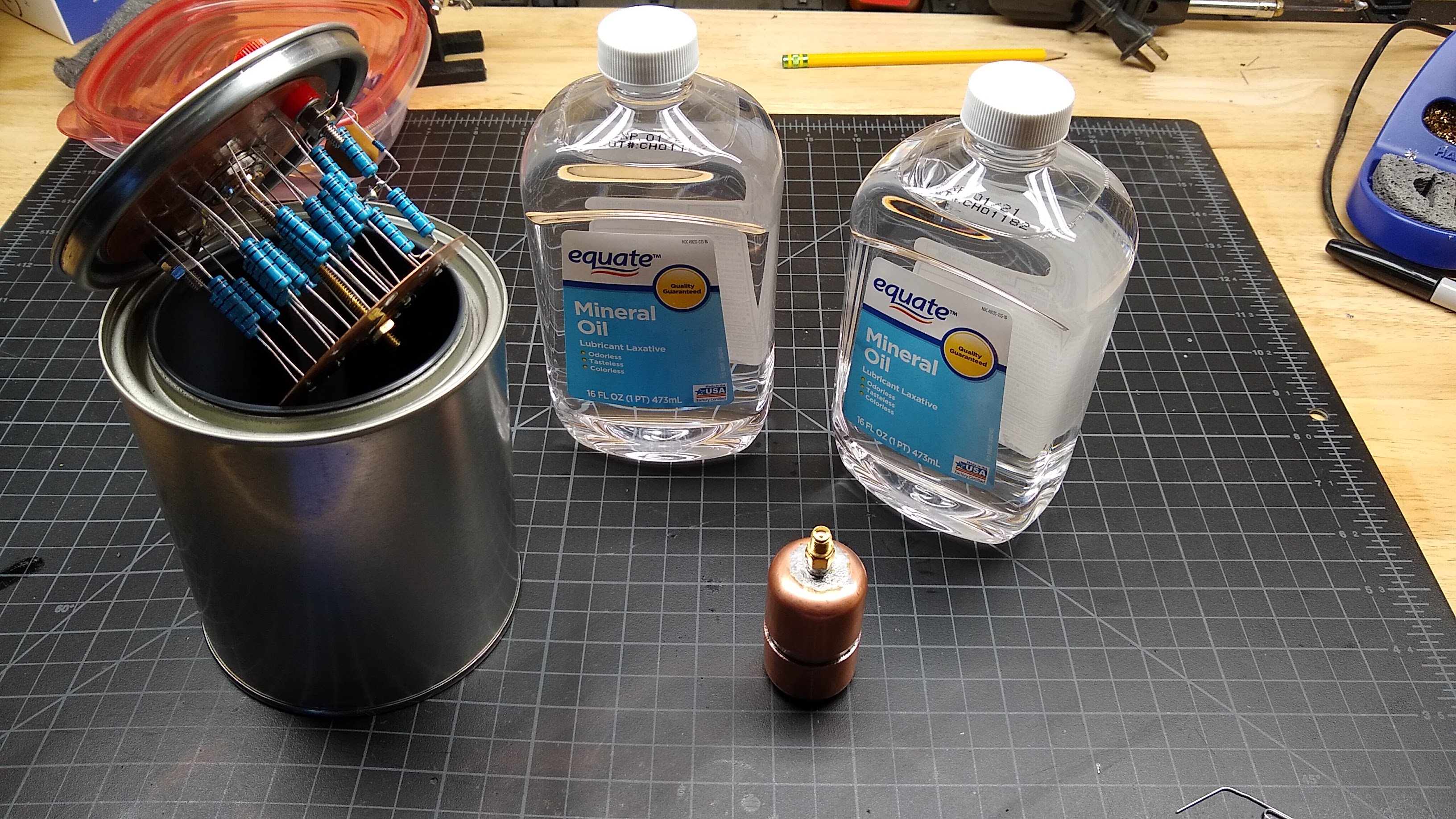 Big Dummy gets ready for a bath while L’il Dummy watches.

I ran the exact same test that was described in my last post to see how flat the impedance of Big Dummy is in the range of 2.5MHz to 20MHz, the upper limit of my function generator. The data was almost identical to the readings from L’il Dummy, which means that this load across the Ham HF bands is a flat 50 Ω. Unfortunately, I haven’t taken my RF device out of storage since moving across the country. Therefore tests at full power and some measurements with the test points have to wait.

I think I really realized the homebrewing bug with these two builds, so I’ll be looking for another cheap build to be done for the next time. I tend to characterize the notoriously dirty output of the Baofeng and see if there is a filter we can build to clean it up. If you have any ideas on this please listen down below.

LAN/WAN Test Equipment Market Growth Opportunities In The Forthcoming Years With Forecast To 2021-2027...

BSAC Broadcasts The Launch Of The BSAC Egypt Licensing Settlement