Home Antenna’s The $50 Ham: A Low cost Antenna For The HF Bands 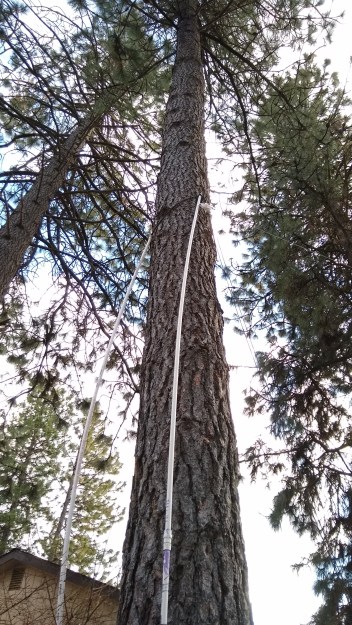 So far I’ve mostly focused on the VHF and UHF bands on the $ 50 Ham series. The reason for this is mainly due to the FCC rules, which are largely restrictive Technician level licensee to these bands. But there is also a financial component; Radio frequency (RF) band privileges cost both enough to learn enough about radio to pass the general license test and the need for equipment that can be orders of magnitude more expensive than a $ 30 cell phone talkie radio.

While RF equipment can be expensive, it doesn’t have to be all that is required to broadcast. And since it is often the antenna that creates or breaks a amateur radio operator’s ability to make contacts, we’re going to look at a simple but versatile antenna design that can be adapted to accommodate anything from a large, powerful base station to a portable QRP (Low) support. Power activation in the field: the end-fed half-wave antenna.

There are many hams for which antenna building is the alpha and omega of the hobby. I understand that; There’s a lot of non-zero wizardry that goes into designing an antenna that does exactly what you want it to do and lots of engineering to make sure it can withstand the elements. I think the latter aspect of antenna building is more attractive to me personally. Getting an antenna to survive wind, snow, sun, and rain is an interesting challenge. So I spend more time thinking about the mechanical aspects of the design that someone has already worked out the RF errors out of.

So I started looking for an antenna that would be suitable for my situation. Perhaps the easiest antenna to build is the classic half-wave dipole. These have two elements, each quarter of the design wavelength, emanating from a central feed point to which the coaxial cable feed line is attached. Of course there are elaborations and complications, but the basic problem for me is the central entry point. My cabin is at the very back of my property, so it is difficult to mount such an antenna without a long lead, which can lead to unacceptable signal loss. Also, a dipole for the 80 meter tape would be 40 meters end to end, and that would be difficult to fit on my long, narrow suburban lot.

For my purposes, the end-fed half-wave antenna (EFHW) is a good choice. It’s exactly what it sounds like: a piece of wire that’s half a wavelength (40 meters long in my case so I can work the 80-meter tape) fed from its end. But it’s not that easy to cut off a 40 meter piece of wire and stick it on your radio. The problem is that the impedance of an antenna varies as the feed point moves away from the center. The impedance increases up to around 2,500 ohms when the feed point reaches the end of the cable. Indeed, this would be a very poor match for a transceiver expecting a 50 ohm load.

To fix this, EFHW antennas need a transformer that matches the impedances. When the impedance between a balanced antenna like a dipole and an unbalanced feed line like a coaxial cable is matched, these are called “baluns”. In this case, however, both the antenna and the coax feed line are asymmetrical, so that the transformer I built is technically a “nonuniformity”. Whatever you call it, it’s pretty easy to build.

My matching 49: 1 transformer, assembled and ready to go outside. I was considering potting the hole in epoxy but decided against it.

I followed the excellent instructions provided by Steve Nichols (G0KYA) to wind up my 49: 1 autotransformer. It’s basically just a large ferrite toroidal core – I got mine from eBay, but there are many options on Amazon – with a few turns of magnet wire. My core is a FT-240-61, which means its outside diameter is 2.4 inches and it’s made from type 61 material. I used 18 AWG magnet wire for the windings. As I was winding it up, I noticed that the varnish coating on the magnet wire was notched by the edges of the ferrite core. I rewound it after covering the toroid with cloth friction tape to cushion the edges a bit – shorts wouldn’t be a bueno in something rated for 100 watts of transmitter power.

As I said earlier, a majority of the problems I had with this transformer had to do with the fact that it was mechanical. I mounted it in a sturdy plastic case and provided stainless steel fittings to connect the antenna cable and the ground connection. I also installed an eyebolt to hold the antenna cable in place. A high-quality SO-239 socket for the lead connection and a 100 pF high-voltage capacitor for better adaptation to the higher frequency bands completed the transformer. With a bit of luck, this antenna should cover bands from 80 m to 10 m.

My method of putting a roll from the ground up on a tree. It would have worked better on a tree with smoother bark.

As luck would have it, my lot is only about 150 feet deep and I am both blessed and cursed by many very tall, very robust Ponderosa pines. The length of my property and the location of the trees allow for a full 40-meter wire in a kind of “inverted-L” configuration. My plan was to tilt the wire from the transformer in the first tree up as far as possible, then route it horizontally to an anchor point in a second tree.

That sounds a lot, a lot easier than it actually is. While many hams have been very lucky to hang antennas from wires slipped over branches, my jaws have all been pruned from their lower branches, with the first living branches more than 12 feet above the ground. I decided to take a “smarter” approach and came up with the idea of ​​basically pushing a loop of rope with a PVC pipe as a push rod up the tree. Although the roughness of the ponderosa bark constantly caught the nylon rope and the PVC pipe fluttered around as sections were added, it actually worked well enough to get the anchor point about three feet above the ground – not much higher than I could am came with my 24 ‘ladder but with a much lower risk of falling to my death.

The anchor point was set in the other tree using a similar method, which caught the attention of the neighbors. Opportunities like this should always be used to achieve some “ham goodwill,” and I assured the neighbors that I would not sterilize their children or disrupt their television reception. In an example of karma, the tree I was working in decided the next day to shed a dead branch, which fell down and damaged my neighbor’s durango. It was clearly coming from much higher up in the tree than I was working, but it was still causing some of the old smelly eye. 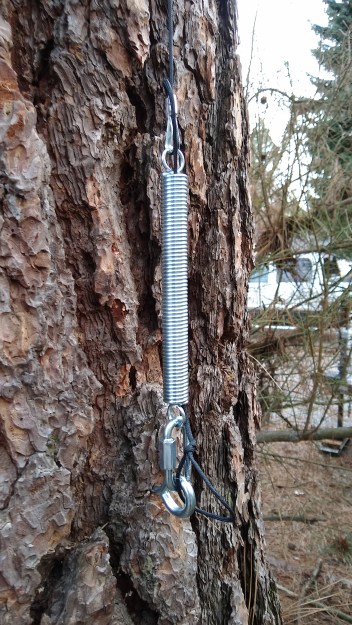 Pendulum relief at the anchor end. Note the safety line that goes through the spring’s hole in case it breaks.

One of the most important aspects of using trees as an anchor for long wire antennas is handling fluctuations. Trees move quite a bit, and when you anchor a wire firmly between two trees without them being able to move with the wind, sadness arises. And yet, you want your wire to stay more or less taut as its shape will affect performance. There are several ways to deal with this and I chose to use clothesline washers at both anchor points. In the middle, the wire runs through the pulley. At the end anchor, the wire is tied to a piece of strong nylon cord through a dog bone insulator. This cord runs through the pulley and down the trunk of the tree to an anchor point by a strong spring. When the trees sway, the antenna can extend or retract a few inches without sagging or snapping.

Finally in the air

I have to admit that this installation is still ongoing. Antennas really should be properly grounded, and I really want to hammer in a ground rod near the transformer. However, both the main feed for my house and the main feed for the entire neighborhood are buried right under our back fence, making this a risky endeavor. As good as underground location services are, I don’t want to test their accuracy on my precious self. So I’ll wait for a decent floor.

Still, I couldn’t help but give this antenna a try. To keep HF out of the hut, I attached a 10-turn air-core choke to the supply line and connected it. I haven’t created any QSOs yet, but using WSPR, the Weak Signal Propagation Reporter system, I was able to reach four continents on the 80, 40, 30 and 20 meter bands in 24 hours. 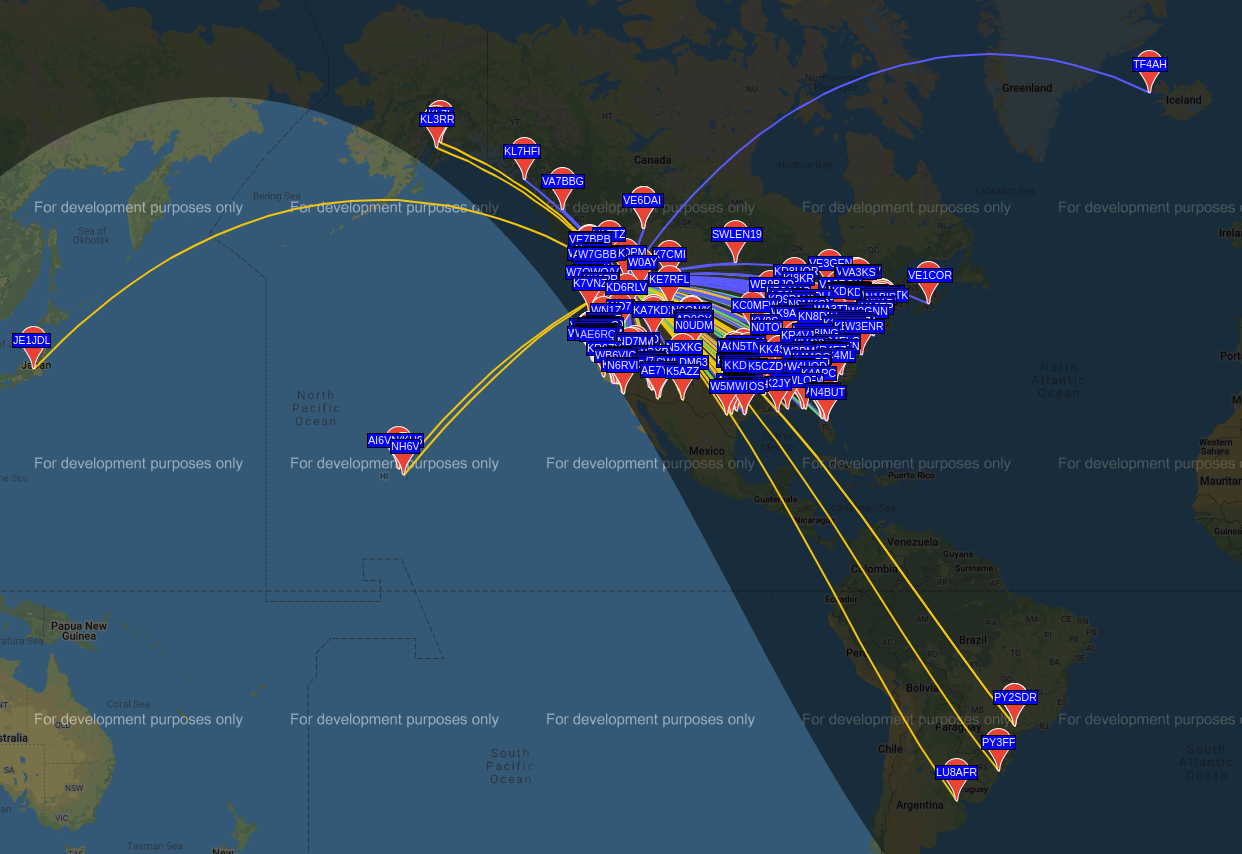 Speaking of WSPR, this and other digital modes are what we’ll talk about in the next issue of the $ 50 Ham. Spoiler alert: despite my previous holdsI think I’m falling in love with amateur radio again.