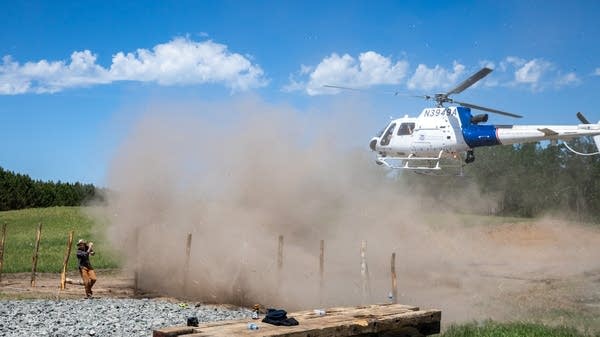 A summer of heightened opposition to the Line 3 oil pipeline in northern Minnesota began Monday when about 1,000 opponents began protesting and disrupting construction, beginning with a blockade at the entrance to an Enbridge Energy pumping station south of Itasca State Park.

Protesters say around two dozen people blocked themselves from construction machinery with two goals: to delay work on the pipeline and to send a message to President Joe Biden to stop Line 3.

Protesters blocked the entrance to the pumping station with a boat on a trailer.

Law enforcement presence so far has been minimal, with several Hubbard County Sheriff Deputies nearby, along with several Minnesota State Patrol Troopers and Department of Natural Resources officials.

At some point, however, a US Border Patrol helicopter flew very deeply to drive demonstrators off the premises.

An activist runs in front of the rotor wash of a helicopter belonging to the Department of Homeland Security, which is throwing up grass and dirt in an occupied pumping station.

It hovered about 20 feet above the ground, aggressively blasting up sand and dirt. A loudspeaker broadcast warned people that if they did not leave the area, they would be arrested.

DHS / Border Patrol used helicopter rotor wash to try to pull activists out of an occupied. to clean up # Line3 Pumping station north of Park Rapids. More than 24 activists are locked to equipment inside. @MPRnews pic.twitter.com/ArTN6FAqwC

Protesters said there were about a dozen workers on the site that morning leaving the site when they saw the crowds approach.

Enbridge said 44 workers work at the Two Inlets pumping station site, including about 10 employees from Gordon Construction, a Native American company based on the White Earth reservation.

“Our workforce has resigned, had to be evacuated, has left the site. This is our effort to de-escalate. But since then people have attached themselves to the devices. Damage has been done. It’s hurtful,” said Paul Eberth, director of tribal commitment to Enbridge.

About 500 Native Americans have worked on the project so far, he noted.

Next to the pump location, organizers say an estimated 700 people have gathered to pray and protest near the upper reaches of the Mississippi, at one of the points where Line 3 crosses the water, near the DNRs La Salle Lake Science and Nature Area.

The new Line 3 is a 340 mile replacement pipeline project that Enbridge Energy is building along a new route through northern Minnesota. Enbridge argues that replacing the existing Line 3 with new, more modern technology will be safer and reduce the likelihood of leaks.

The work on the project is more than halfway done. Construction work resumed on June 1st after a two-month break during the spring thaw. The company expects to have 4,000 workers on site by mid-June, with the pipeline being completed and operational by the end of the year.

Pipeline opponents argue that the project will exacerbate climate change and increase the risk of oil spills or leaks that could threaten water resources, with several Ojibwe tribes retaining contractual rights to hunt, fish and collect wild rice.

It is a key moment for the groups fighting the project. Since Minnesota utility regulators first approved Line 3 in 2018, Opponents have promised tough resistance. The new pipeline would transport nearly 800,000 barrels of Canadian oil daily through northern Minnesota.

This week’s protests began over the weekend as part of the Treaty People Gathering, an organized action based on White Earth that included speeches, rallies and coordinated acts of civil disobedience.

A Department of Homeland Security helicopter uses its rotor wash to stir up debris while activists pick up materials to build barricades at an occupied Enbridge Line 3 pumping station.

Faith leaders gather for an interfaith prayer meeting ahead of a day of protest against the Enbridge Line 3 oil pipeline at LaSalle Lake State Recreation Area.

An activist who refused to give his name lay chained to construction equipment while manning a pumping station on Line 3 of Enbridge.Next slide

They make MPR news possible. Individual donations are behind the clear coverage of our reporters across the state, stories that connect us, and conversations that offer perspective. Help keep MPR a resource that brings the Minnesotans together.