Home Ham Radio Transceivers Ham and the art of communicating 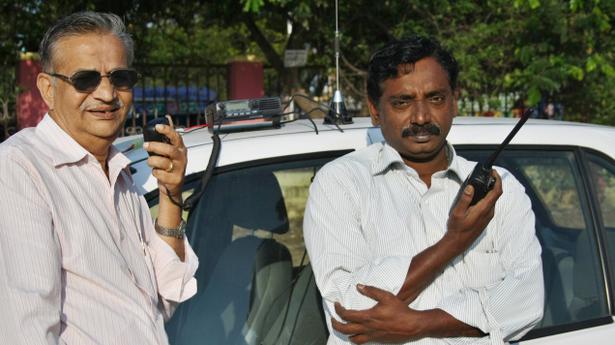 It’s seven in the morning and AP Ravishankar and D. Selvaraj are playing with wires in an indica. They connect the car’s battery to a device that looks like a World Space radio receiver. “This is a transceiver. It sends and receives signals, ”explains Selvaraj. A magnetic antenna is attached to the roof of the car and connected to the transceiver along with a microphone. The Indica is now a “ham hut”. It contains amateur radios that use certain frequencies for private wireless communication.

Ravishankar sets the transceiver and we hear Prakasam from Muthumangalam (Erode) describing the weather in his city. “Good morning ECY,” he says to Ravi. “Bright, sunny morning. Comfortable here. Good afternoon. “Some fiddling with the tuner and Krishnakumar from Coimbatore are broadcast. He gives a brief overview of how the Hamming community works in the city.” We communicate through the repeater on the bell tower in President Hall, “says A repeater is a device that receives amateur radio signals and retransmits them at a higher power. “We’re in the VHF (Very High Frequency) band. This repeater has a footprint of around 25 km, which means that the Signals can also be received from ham in Mettupalayam, Udumalpet, Palakkad and Perundurai. “

Krishnakumar or VU3NKK, his Hamming name, says, “An amateur radio transmitter can be set up in no time. In order for two people to communicate, they need two amateur radios that are separated by a distance. “There are around 200 licensed amateur radio operators in Coimbatore, 50 of whom are active hammers. Krishnakumar says how they played a significant role during the Noyyal Yatra organized by Siruthuli. “We had hammers and their equipment stationed at various checkpoints on the route of the Yatra. They conveyed information about the traffic and other emergency situations that occurred during the yatra. “

Another amateur operator, Ramesh from Saravanampatti, explains how amateur radio operators voluntarily transmit information in disaster-prone areas where even cellular networks are blocked.

Ernest Peter, a marine radio operator and another amateur radio enthusiast, explains that Hamming is the queen of hobbies. While he admits that people prefer the internet or cell phones for communication over amateur radios, he believes the joy of broadcasting voice signals over the radio and communicating with other hams is special too.

Some of these ham lovers even build their own wireless transceivers. Selvaraj is one of them. Selvaraj, a radio enthusiast, was already assembling radios in sixth grade. “I always had a radio in my school bag. I’ve listened to the BBC and Radio Ceylon. When tuning to channels late at night, I sometimes heard conversations between hammers. “And then he decided to take up hamming as a hobby.

Older hammers offer months of courses for those who want to take up the hobby. At the end of the month, budding hammers appear for an exam conducted by India’s Ministry of Telecommunications and Information Technology. After the test is complete, the potential hammer goes through various stages of testing. Only then is he granted the license to operate a radio transmitter. “Once the license is obtained, a person is an official amateur radio operator. The process takes between six months and two years, ”says Peter.

Peter praises the virtues of hamming and says, “It’s an exciting way to make new friends and share knowledge. The best thing about this medium is that we don’t have to pay anyone to have a conversation. We can also communicate with other hams from anywhere in the world. There is no talk of network disruptions. “