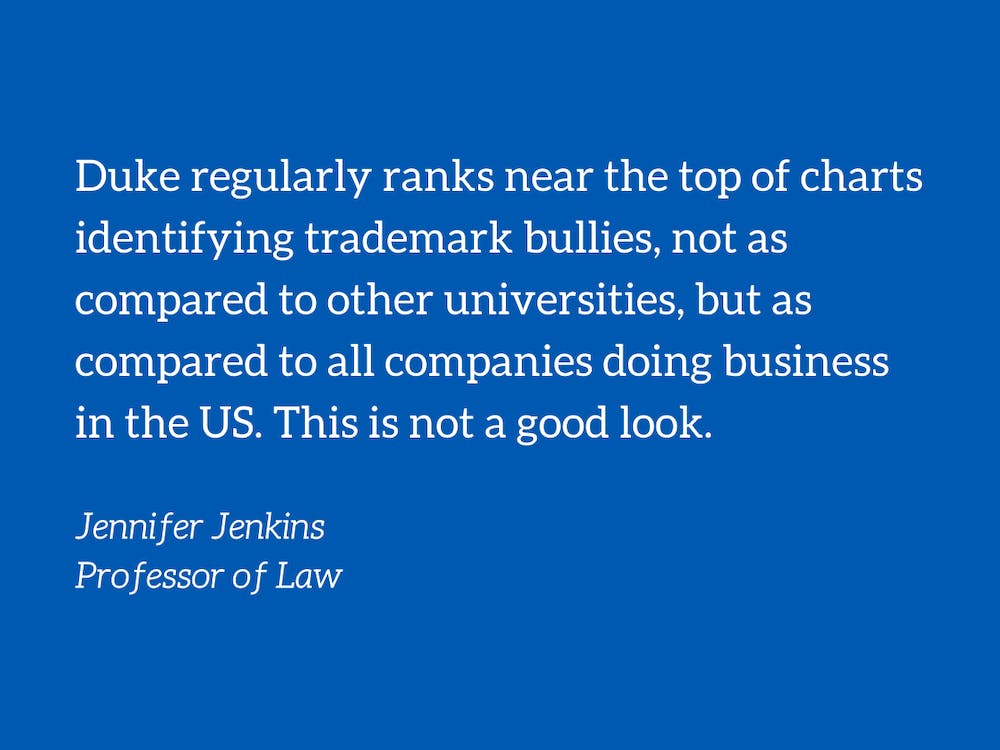 I am co-author of “The Devil’s Mark: The University as Brand Bully, ”From The Chronicle in a current article. Unfortunately, our study shows that our beloved university, Duke, has the dubious distinction of being a brand bully. Why? Because it routinely threatens individuals and small businesses with unfounded legal claims and defies their attempts to register brand names to which they are entitled, like “The Dude Diet” (for a website related to nutrition), “Bluefood” (for food products )), “Put on your blue!” (for prostate cancer fundraising campaigns), “D’Grill” (for grill smokers and grills) and “Pretty Devil” (for electronic gaming machines). There are hundreds more examples. As we explain in our article, Duke’s aggressive tactics go way beyond what trademark law actually allows. Not only does it cost competition and freedom of expression, but it also costs Duke’s budget, which is diverting valuable money into unfounded legal action, and the university’s reputation. Duke regularly ranks at the top of the charts identifying brand bullies, not when compared to other universities, but when compared to all companies doing business in the United States. This does not look good.

To be clear, Duke should stand up for the legitimate protection of its trademarks. Objections to “Duke” for hospital blankets or catering services or to “Cameron Krzyz” for printing on clothing are legally justified. This is not the “bullying” that has attracted so much negative attention. Our concern is with Duke’s claims, which have no legal basis. These comprise the majority of the Duke’s actions.

As a Duke fan and brand professor, I had hoped that our colleagues dealing with such matters would be appalled and act immediately to rectify the situation. Instead, they decided to double up, and do it in a way that is both revealing and unsettling. Here are the misleading justifications that Mr. Wilkerson, Director of Trademark Licensing at Duke, emailed The Chronicle, followed by an explanation of why they are flawed. Hopefully, if Duke’s actions were carried out in good faith and due to a misunderstanding of applicable law, these clarifications will help to correct course.

1) Duke says he’s filing so many trademark lawsuits because “Duke” is a fairly common word with associations of names, kings, and others “all of which can create confusion in the public eye as to whether such uses apply to Duke University or not.” ”

Reality: According to the law, this is exactly backwards. Ownership of a trademark is not ownership of a word. Delta Airlines coexists with Delta water taps. Pigeon soap exists alongside pigeon chocolate. Precisely because Duke is a “common word,” other unrelated uses of “Duke” do not create “public confusion.” In fact, there are 193 nationwide registered trademarks with the name “Duke” that have nothing to do with our university. According to Duke’s logic, when Bass Ale bore the trademark “Bass” for beer in 1912, all other uses of the word “bass” could have been challenged. So much for the companies that want to use “bass” for the fish, the instrument, the sound range or the surname. That’s not how the law works. Trademark law reserves the right to use common words for the public and not for a single entity.

In addition, many of the applications that Duke targets do not contain the word “Duke” at all. Duke rejects brands with just a few letters that are common with “Duke” (such as “The Dude Diet”, “Kuke”, “Goluke” and “Le Duc”), and routinely targets brands because they happen to be the letter “contain”. d, the word “devil” or the word “blue”. For example, Duke filed formal appeals against “Beach’d” bags, “Devils Nightmare” beer, “Stay Blue” denim clothing, and “True Blue” auto parts stores. Obviously there is no plausible confusion here: the public does not assume that any use of “d” or “blue” somehow relates to our university.

2) Duke says, “Duke’s fame means there are more counterfeiters than there are in less reputable schools.”

3) Duke Says, “In 2020 the US Patent and Trademark Office published thousands of applications, but we only found 221 that we thought were potential problems and we ended up filing only 12 opposition proceedings. Most were done through amicable correspondence or agreements to avoid confusion. “

Reality: Wow. In 2020, a relatively modest year for Duke’s trademark filings, Duke identified “only” 221 “potential issues” that were “fixed”. Incredibly, this statistic shows that Duke’s aggressive practices go well beyond what we have documented. In our article, we only covered the tip of the bullying iceberg – filing expensive appeal procedures where we could review the publicly available records. There the high quantity and low quality of Duke’s claims were already worrying. But now, Duke helpfully points out that it actually challenges a lot more applications.

So let’s take a closer look at that. In addition to the opposition process, the Trademark Office’s database shows all of Duke’s “deadline extensions” to file such objections, during which it can send what is known as “amicable correspondence”. If you include all of Duke’s trademark filings from 2015 to 2021, over 1,000 of them have been filed. This is not only far more than at other universities, but also more than the world’s largest megabrands in the same period (in comparison, Apple submitted 745, Facebook 226, Amazon 210 and Wal-Mart 120). Obviously, Duke is not so well known as having more potential branding “issues” than these companies. Rather, the reason Duke’s numbers are so unusually high is because the vast majority of his submissions have no legal value. To name just two examples, here are applications that Duke targeted with “time extensions” in 2020:

Get The Chronicle straight to your inbox

Sign up for our editorially curated weekly newsletter. Cancel at any time.

That Duke would label these as “problems” speaks for itself. And, of course, what Duke calls “amicable correspondence” were actually letters threatening legal action unless the recipient agreed to Duke’s demands. I doubt anyone who receives these will see them as particularly “consensual”.

4) Duke says, “We have found from experience that in this way we can take more amicable and cheaper steps to stave off problems rather than causing problems and then spending money on subsequent lawsuits and creating (avoidable) fear. ”

Reality: This statement would only make sense if the attempts of others to use “devil” or “blue” or the letter “d” are actually “problems” for Duke. Under trademark law, most of the applications that Duke disputes do not affect his rights. This is like telling the schoolyard bully to take your lunch money now so he doesn’t have to fight you for it later during recess. He wasn’t entitled to it at all. To the extent that Duke suggests using current threats to ward off future problems that don’t already exist, it is inherently speculative and no longer defensible. Auto parts store “True Blue” is not going to morph into something that rivals Duke’s “Blue Devils” brands. Duke was against it anyway.

Many trademark attorneys and Duke alumni have raised concerns about Duke’s strangely aggressive tactics. Ironically, Duke’s attempts to “protect” his trademark actually hurt her. Obviously, a university shouldn’t be concerned with bullying. I love this university. We can do better.

There is so little that any of us can control. Here is an example of something Duke can easily do to save both financial and reputational costs. Just stop the bullying. It is a waste of resources, hurts other people, and is an embarrassment to the high ethical and academic standards of our institution. We would recommend the words of another Duke (Ellington) to our licensing office: “One problem is the chance to do your best.” And no, we don’t have his name either.

Jennifer Jenkins is a clinical professor of law at Duke Law School.

The $50 Ham: A Low cost Antenna For The HF Bands