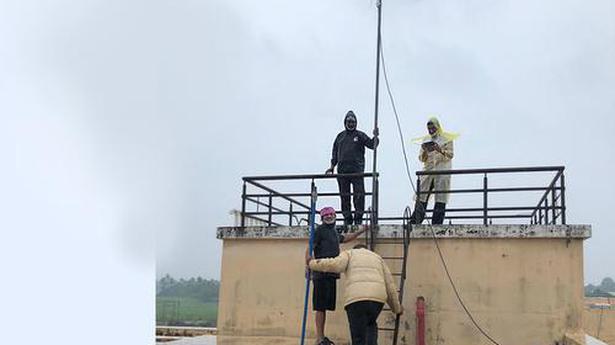 For KM Devadas and Aravind Balasubramanian, the fourth week of November took an unexpected turn. “Turn” is an understatement. ‘Twist’ is closer to the truth than walking into a cyclone. HAM enthusiasts, these Chennai residents, had accepted an invitation from the Cuddalore District Collectorate to set up HAM stations, both VHF and HF, throughout the district.

If Nivar turned out to be overwhelming and all other communication systems went down, they had to let messages flow back and forth between the Collectorate in Cuddalore and six local administrative offices, including the block development offices in Kumaratchi and Parangipettai and the municipal Panchayat office in Killai and USA Revenue Divisional Office in Cuddalore.

“During Nivar, on November 22nd (Sunday), there was a call from the Cuddalore District Collector. We were in Cuddalore on Monday afternoon and had set up seven radio stations by Tuesday evening, including VHF and HF, ”says Devadas (VU2DH). “Six HAM enthusiasts from Bengaluru have joined us. While the on-site team managed the seven stations in the district, many Chennai HAMs were on standby on HF, which can send / receive messages around the world. ”

Aravind (VU2ABS) says: “We took a lot of equipment with us, but we didn’t have the people. Due to the COVID-19 situation, we were unable to set up a large team of HAM radio volunteers. Many of the HAMs are seniors and so we cannot volunteer them and put them at risk. And because it was the middle of the week, all the teenagers were busy with their office work. ”

The disadvantage was partially offset by the fact that HAMs were on call not only from Chennai. “There were local HAMs from Cuddalore, Puducherry and Chidambaram on standby from their locations,” explains Aravind.

Since what was feared did not occur, the HAMs did not have to conduct a disaster communication exercise.

“If the communication systems had failed due to the cyclone, the district administration would expect the HAMs not only to provide communication support from the stations, but also to be on site,” explains Devadas. “During the 2004 tsunami, we HAMs were in the field – in Cuddalore and Puducherry – standing shoulder to shoulder with the army personnel doing the rescue work. We noted the details and passed them on to the administration.”

Devadas highlights how the team of HAM enthusiasts was prepared and equipped for such a turn.

“We had radios in our car and walkie-talkies,” says Devadas. “I had brought six sets of equipment, including a radio transceiver, cable, regulated power supply, and DC power supply and antenna – they cost a total of £ 3. The five HAMs from Bengaluru also brought their equipment but did not have a full set. Only two sets of equipment were used in the Collectorate. I gave the rest of the sets to the HAMs from Bengaluru. With these instruments it is possible to install a HAM communication system worldwide in just half an hour. ”

Devadas and Aravind, who were at the Cudallore District Collectorate with Arulmozhi, District Informatics Officer (VU2OHM), worked in shifts, two or three hours each, before handing over the reins to the other.

Devadas remembers how it took some work to install the antenna on the Collectorate building’s water tank.

“It was raining and it was windy, but we obviously couldn’t take an umbrella when we climbed the ladder and stepped onto the water tank. We were in the rain for two to three hours when we set up the antenna. ”

“We help voluntarily in emergency situations and spend out of pocket to cover fuel and travel costs. Until today nobody has given us a rupee. Also no thank you letter. We don’t ask for it or expect it because our only goal is service, ”says Devadas.

He points out that HAM hobbyists involved in this volunteering are either mostly well-established professionals or business people.

The 63 year old Devadas lives in Kolathur and runs a shipping company.

Are HAMs a Dwindling Tribe?

“A lot of people think so; because there is a cell phone and you can make it ring from anywhere in the world. But if it fails what will you do? It always fails when there’s a flood, cyclone, or earthquake. We understand ourselves in dealing with disaster communication. At least in emergency situations, employees should be trained and equipped to offer HAM communication. “

As in any field of knowledge, the training of young people in HAM communication hopes for it.

“If we organize 100 students to study HAM radio communication, only 20 or 30 show up for the exams,” says Devadas, a member of the Madras Amateur Radio Society. In the case of HAM exams that are intended for obtaining the HAM license, two grades – restricted and general – must be clarified.

Devadas says, “I got my HAM license when I was 30 years old. An 18 year old can take these exams more easily than me. Young students tend to learn faster. ”

Both Devadas and Aravind are members of the Amateur Radio Society of India.

County may create licensing scheme for those that sell tobacco | News, Sports, Jobs