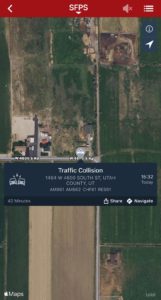 SPANISH FORK, Utah, March 6, 2021 (Gephardt Daily) – A 12-year-old boy was fatally injured after being run over by a farm tool in Spanish Fork Saturday afternoon.

Utah County’s Sheriff’s Department spokesman Sgt. Spencer Cannon confirmed to Gephardt Daily that the first responders had been called to the accident site near 1464 West 4600 South at around 3:32 p.m.

When they arrived, Cannon said, they found the child in extremely critical condition.

A Life Flight medical helicopter was called in to help with the rescue but was canceled when the child died on the scene.

The Utah County Sheriff’s Office is handling the investigation.